What Happens if I’m Arrested in Massachusetts? 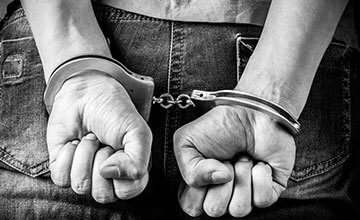 Getting arrested is never a pleasant experience. Even in the best-case scenario, you’ve still got a long road ahead to prove your innocence.

And that road is littered with obstacles.

Court dates, hearings, motions, and mountains of paperwork will all need to be handled with focused caution. One mistake can result in hefty fees or fines, plus a litany of other consequences.

You’re not alone in wondering “What happens if I’m arrested in Massachusetts?” The Fogarty Law team has over a decade of experience in both the District and Superior Court of MA. That’s why we compiled this guide. When you know what to expect, you stand a better chance of faring well in court.

If you’re charged with a felony in Massachusetts, the process looks like this:

Most of your felony case will be handled by the Superior Court. But first, the law requires a formal arraignment in District Court. You’ll be formally read your charges at this time.

This hearing is necessary to determine whether there’s enough evidence to support your charges. Basically, it’s just a confirmation that there’s a valid basis for your arrest.

All of the information from your arraignment and probable cause hearing is presented to a grand jury. The identities of each jury member is secret, and neither you nor your attorney can participate.

The prosecutor presents everything to the grand jury, who then decides whether your case goes forward to Superior Court.

Your Superior Court arraignment will probably feel like déjà vu—it’s very similar to what you did in District Court. Your name will be called, your charges are formally read to you, you’ll plead not guilty, and the docket is updated.

That said, you should still have your defense attorney present. This helps everything run more smoothly for you, and ensures your rights aren’t violated.

The pretrial conference in Superior Court is often more formal than in District Court. Both sides formally discover and exchange information related to your case. There will also be discussion about any motions your lawyer is planning to file, number of witnesses, and other details.

This is required for substantial motions, such as Motion to Dismiss your case or Motion to Suppress Evidence that was mishandled. These hearings aren’t part of every felony case, but they are common. A skilled MA criminal defense attorney will explore every possible avenue to have your case dismissed.

These are more like deadlines than appearances. Compliance means the date by which both sides must comply and exchange all evidence. Election is when you “elect” (or select) your trial date. You’ll often do both on the same day during what’s called “C & E.”

If the verdict is guilty, the judge must decide your sentence. They’ll take every detail of your past and your case into consideration. There are also laws in place to guide the minimum and maximum penalties.

If you’re found not guilty, you can finally breathe easy again and move on with your life.

If you’re charged with a misdemeanor in Massachusetts, here’s what to expect:

After your arrest, you’ll receive a court date for your arraignment. This will be your first court appearance. No juries or witnesses this time, though—the purpose is to officially inform you of the charges against you.

The pretrial hearing is often actually several meetings, not just one. Both sides will exchange all relevant evidence and information so they can construct their arguments for court. This includes everything from witnesses to forensic testing.

“Compliance” means the due date for all information to be exchanged—in other words, the cutoff date to comply with the other side.

Then, you’ll “elect” which kind of trial you want—one with a jury, or just a judge.

At your trial, it’s on the prosecution to prove beyond reasonable doubt that you indeed committed the crimes you’re accused of. They do so by presenting enough evidence to convince the judge and/or jury.

You and your lawyer will work to break down the prosecution’s case and prove your innocence. The judge is the ultimate referee, as they have the final say on what’s allowed to be considered evidence.

If you’re found guilty, the judge must determine your sentence, or punishment. They’ll consider all the details of your case and your criminal record to make this decision. Both sides will argue to the judge as to what they think is fair.

You can always appeal a court’s decision to a higher court. If the higher court finds that your case was mishandled, you’ll have a new trial or have your case dismissed.

What is an Arraignment in Massachusetts?

An arraignment in MA is the first step in criminal legal proceedings.

When you arrive at the court, you’ll be expected to check in with a probation officer. They typically ask you for basic identifying info in order to pull your records. But if you’ve already hired legal representation, just let the officer know upfront.

From here, you’ll be directed towards your appointed courtroom and wait for your case to be called. At Fogarty Law, we recommend pleading not guilty. Then the judge will set your bail and any other conditions they feel are necessary, like wearing a GPS monitoring bracelet.

The judge has the final word on these details.

What is a Pretrial in MA?

A pretrial in MA is a hearing between the prosecutor and your attorney. Both sides will discuss any evidence, documents, etc. which need to be shared. It’s illegal to purposely leave anything out at this stage.

You’ll also hear the word “discovery” a lot during this time. Discovery just means the formal process of your attorney and the prosecution exchanging information. The ultimate goal here is avoiding “trial by ambush” for both sides, which means your attorney or the prosecution isn’t aware of all evidence before the trial.

What is a Trial in Massachusetts?

In Massachusetts, a trial is when you and the prosecution officially go before the judge, make your cases, and receive a verdict. You can choose a bench trial, which has no jury and just a judge, or a jury trial with a judge and jury. Your attorney will advise on the best choice for you.

It’s on the prosecutor to prove that you committed the crime beyond a reasonable doubt. You and your attorney will present your own evidence, witnesses, and cross-examinations to disprove the other side.

What You Should Do if You’re Arrested in MA

If you’re arrested in Massachusetts, there are several things you should do. During the arrest, don’t resist and don’t try to chat with the police. Law enforcement officers know both of these scenarios are an opportunity to further incriminate you.

You’ll be allowed to make one phone call from the police station in most cases. Keep your call short and don’t discuss details. These calls are almost always recorded and can be used as evidence in court. Ask for an attorney or bail money, and leave it at that.

Finally, hiring an aggressive and successful MA criminal defense attorney is the best thing you can do. At Fogarty Law, we’ve successfully defended our clients in both District and Superior Court for over 10 years.

What Happens if I’m Arrested in Massachusetts? Back to Blog